I am somewhere over the Sea of Okhotsk, off the coast of Russia, traveling at 33,200ft traveling back home from China. At home, it is 4:09 AM. In China, it’s 5:09PM. I was in China as part of an MIT class, 6.A53, Entrepreneurship and China. We traveled through Shanghai, Hangzhou, Guilin, Yangzhou, Shenzhen, and Hong Kong. Along the way we visited companies, universities, and entrepreneurs. We also saw the sights of China and participated in the MAD 2010 Asia conference. It was a high paced tour of China’s customs and business. 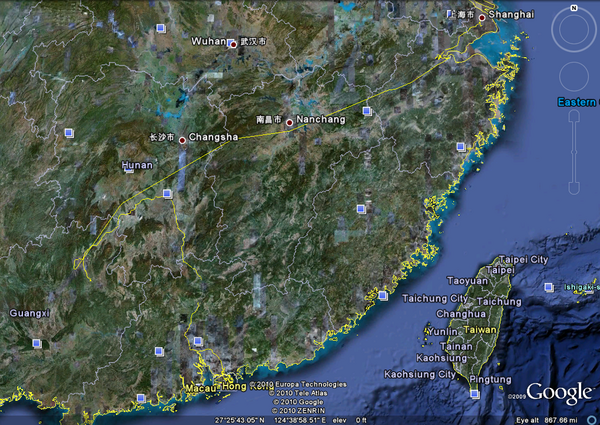 The trip started on January 1st. to Shanghai. There were a lot of families traveling back home on the airplane. Shanghai is the world’s largest city, and it sprawls out since it is not contained by anything like Manhattan or Hong Kong. We took their $1.2 billion USD maglev ride. It was cool, but it did not really go too far. Also the maglev did not have good English. That was a recurring theme in China, even official tourist sites don't have good English. 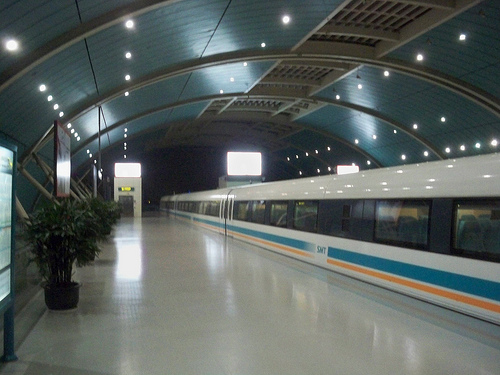 We then got on their metro system. The system is all very new, all the stations look the same, and it is expanding with a line opening every month or so. This is so incredible. In the US a city is considered transit friendly if it opens a new line every decade! 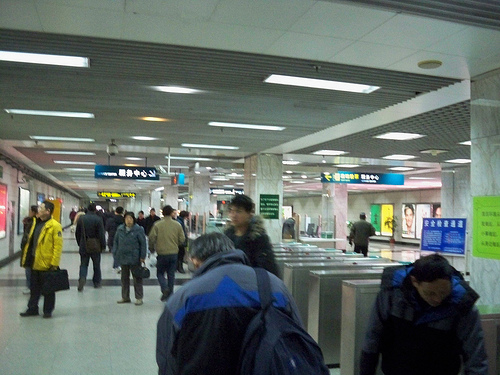 On one day, we visited the Shanghai World Financial Center, one of the world’s tallest building. So apparently that title is very contentious with what counts as a building and what is included in the height count. Wikipedia says it is the third tallest building in the world, but the highest occupied floor, the highest height to roof, and the highest observation deck. We were their a day before the Burj Khalifa opened and took some of the title of highest occupied floor and highest height to roof. 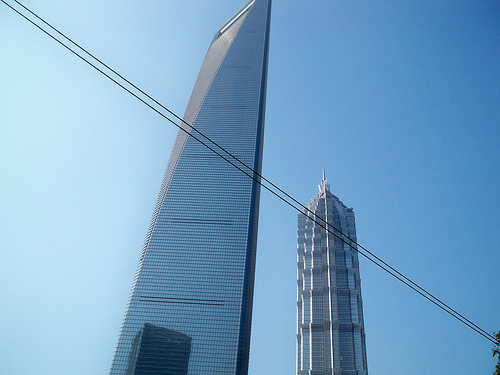 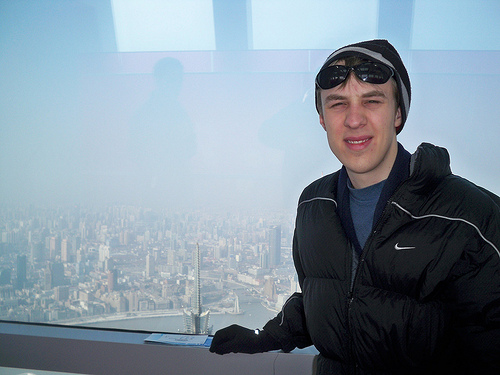 There are signs for the expo everywhere. I really hope to get to go. I think it will be one of the last big ones as they are expensive with little direct benefit. We had an hour one morning, so we visited the construction site. 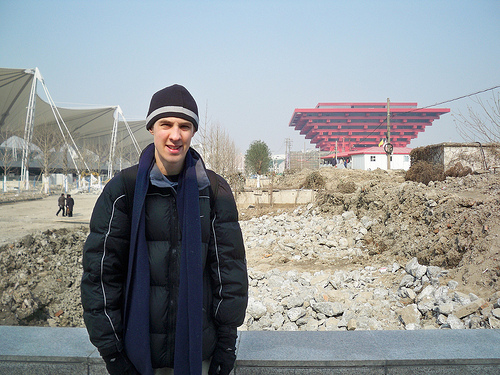 Where we were was a very wealthy area. It was a home for the newly wealthy Chinese to enjoy conspicuous consumption, American style. In addition, there were a lot of hawkers. You could could buy a fake Rolex only a few feet from a luxury store selling legitimate ones. 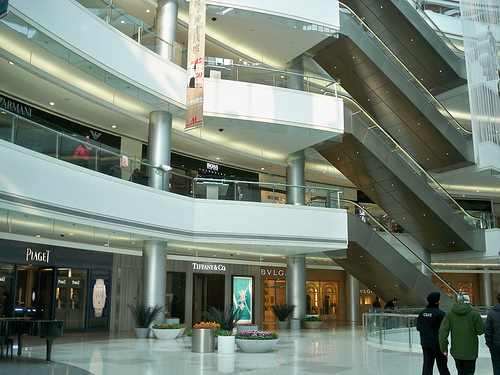 It was very cold when we were in China, around 0C. Due to an old law, buildings below the Yangtze River cannot have heaters. Almost all of the homes have these inefficient “air conditioners” which have electric heaters in them. Dorms rooms do not have heat. One school even requires students to go to another building for water or showers! Even the Chinese think this is a little too rustic. The classrooms have a little heat, but are still cold by American standards. The hallways are not heated as well. I've also seen this trend in the Caribbean.

It is very hard for a Chinese student to break out and stand out. Entrance to universities in China is by entrance exam, counting school skills only. They have to work very hard to get to the top-tier university in China. But once they get there, the road is still very long. Only a few can go to an American graduate school, let alone MIT. Even if they go to American grad school it is challenging to find a company willing to sponsor their work visa. But they do work very hard to learn science and engineering. 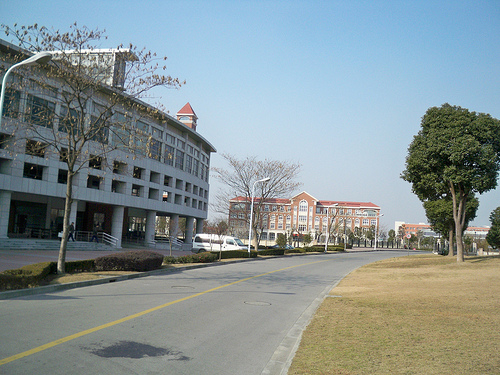 The students do not get much chance to work as a team or think creatively. Entrepreneurship in China in some senses is very strong; there seem to be millions of people selling stuff. However, entrepreneurship as a career path is not looked upon as high as a standard position in a large company. In addition, the infrastructure is not ready to support ventures who want to go for economies of scale and lead the industry, in the way that Silicone Valley ventures do. Part of this might just be the scale of business in China. The cost of labor is so low that firms can not really use technology to compete. In addition, failure is highly stigmatized, where as westerns know that one learns for failure.

One of these universities serves more meals in a minute than MIT does all night. It is also far lower cost. One meal is about $7 RMB, or 1 USD, while MIT struggles to make money off $7 USD meals. Granted, it looks like a prison cafeteria and the food is mass produced, but the cost is so much lower. 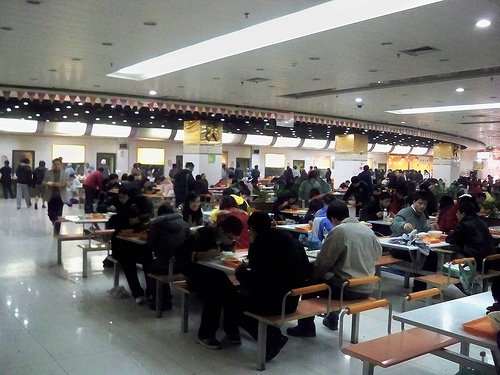 Cisco has set up an R&D center in China with about 1,500 people. They told us that they did that as a pre-condition for being able to sell to the Chinese government and state-owned telcos. It does look like they invested a lot of money into the center. The people we saw seemed to be doing testing – for operations and temperature. I got the feeling that the center does the testing and entry-level engineering, which Americans would find too boring. I suspect that these centers will be doing more and more. The Chinese are also very proud to be doing entry-level engineering work for an American firm. (no photos from this stop)

We visited two large factories, one produced bags and the other produced clothes. One had a city of about 12,000 people. Both worked for many well-known US brands side by side in different production lines. The label is responsible for the design, picking the fabric, and ensuring quality. The cost of the product to manufacture is about 1/5 of retail cost. The workers make a little more than $1,000 RMB a month (about $150 USD) minimum. Both companies were run by Hong Kong owners and managers. The company with the large city had a 300 room “hotel” for its managers. 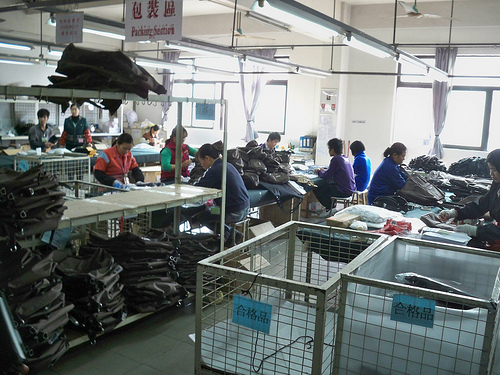 These factories are successful because of the nearly endless stream of China’s 1.3 billion people into the city looking to take any job they can. Southern China at $1000 RMB/month is actually too expensive; many factories are moving up north where labor is only about $500 RMB/month. Remember the cost of living is far, far lower. From what we saw, the workers seemed OK with the work. They want to work more and earn overtime. For them it's better than the farm where they made nothing on plots the size of an Olympic-sized swimming pool. People's quality of life is improving, but for many, a comfortable life still has a long way to go.

I liked the town of Yungsho very much. It was a very outdoorsy-tourist town, like the Jersey Shore. That means that the town does not have big luxury hotels and stores, only moderate priced locally-operated stores. They said that before most of the visitors were western, not now it is 80% Chinese. The town exists for the wonderful landscape that you can see with rafting down the river in a Bamboo raft, or riding a bike. 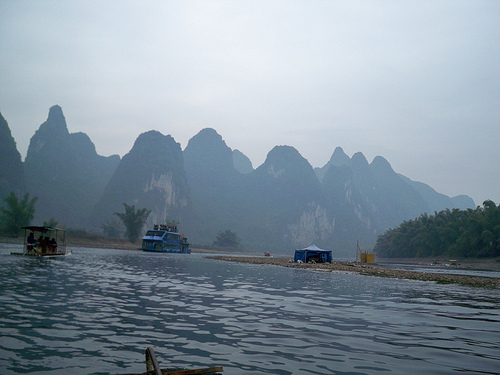 We took a sleeper train from Guilin to Shenzhen. It was the first time I had taken a sleeper train, and I enjoyed the experience. China’s railroads have very little scenery around as you go by. The train station in Shanghai was very nice and big. I was surprised at how many people were in there. They also have more of a process where you wait in a waiting room and when you exit, you take a separate path. The trains were also all full, even the CRH (China Rail Highspeed). In the west the train system is used mostly by business travelers, and is far more expensive. In China, everyone travels by rail. The cost of a ticket, even for high-speed, is only a few US dollars. 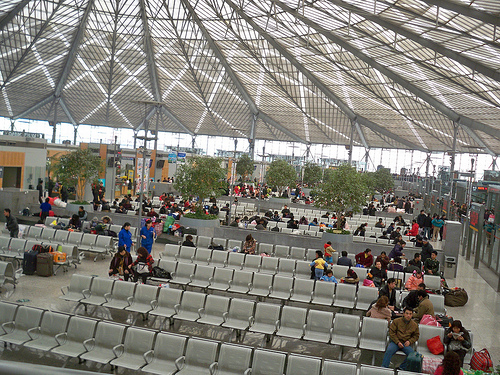 When you cross the border into Hong Kong, it feels very different. It just seems cleaner and more modern, including the customs building. 95% of the signs are in English as well, and they use good English. The place has more history and they don’t use that granite tile everywhere. The trade-off is that the buildings are older and smaller. Our hotel room was very small. Over the border in Shenzhen we had four times the space for the same cost. 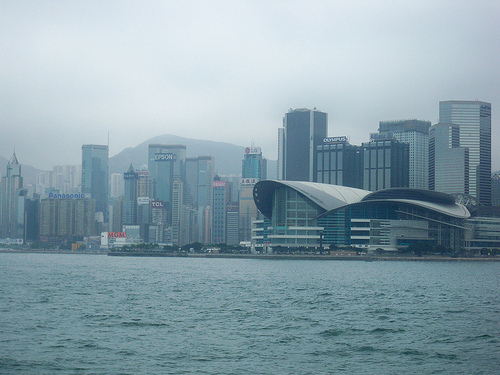 Over the trip, I read both Superfusion and China Inc. Both were written before the current recession. Superfusion’s thesis was that the United States and China’s economy have become, without much notice, intertwined and inseparable. An idea that I agree with, but can be described with far fewer words. I enjoyed China Inc. much more. It recounted this history of China and smoothly jumped from topic to topic on China's economic rise. It explained much of what I was saw and experienced for myself in China.

I believe that in the future, pure manufacturing and engineering jobs will continue to leave the country, much to the protest of unions whose artificially high wages and benefits will come crashing down. The US still has the lead in creative enterprises for now. As the Recession Generation article from Newsweek points out, the US will be faced with a world where credit may not be as easy as it was in 2008 and where more people are facing a comfortable standard of living around the world. However, I disagree with the assessment made in the article that hard work no longer pays off in America. We will have to continue to work hard, study science and engineering, and come to terms with the new way things are. Personally, I think that all of the hours I have put in have led to my admission to MIT and my selection to go on this trip. Entrepreneurship and advancement in a company are still tied to hard work. Americans cannot grow up and be entitled to a job. There is too much competition from worldwide.

I took over 5,300 photos and videos on this trip. Most are geotagged. They are on Flickr