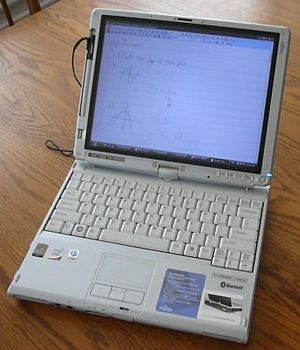 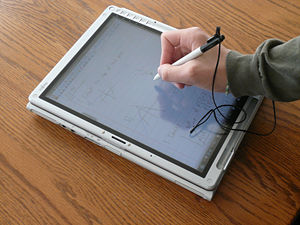 In March 2008 I bought a Fujitsu T4220 Tablet PC. I use it as my primary mobile computer until it broke for the second time in May 2010, when I replaced it with a Lenovo U350. I used it a little bit in 11th Grade. In Gov School, 12th Grade, and the first semester of MIT; I carried it with me every day and took notes in every class on it. I wrote The Quest for the Perfect Notetaking Medium after Gov School trumping the use of tablets in school. I changed my mind on tablets while studying for finals at MIT and I wrote about my experience in Learning to Learn at MIT.

I really invested in this machine by buying 3 bay batteries (way too many; I only really used one) and a bump case. A bump case is a case in which the machine can remain while you are using it. It also had a shoulder strap I used in 12th Grade, but I just put it in my backpack at MIT Freshman. Looking back, I think the case was more annoying than the protection it provided. It was a pain to rotate the laptop, and it made it harder to hold and use the laptop I think. It also made the computer bigger.

This computer broke frequently. It broke once in 12th Grade when I pulled it on the floor. One day after class I got caught in the case strap and I pulled my tablet on the floor; the computer slide easily, since the case did not provide much friction. Ironically, I think the case actually made the fall happen. The computer displayed a weird pattern on it and then faded to black. When I turned it on next time, the fan spun up full and the machine did not boot up. I replaced the motherboard (~$300) and it worked again. In May of freshman year, I was walking home from an exam in a big rainstorm. I thought I had my backpack closed tight, but water still leaked in. I tried buying a dead machine ($$), but I was not able to get it to work again. Instead, I decided to buy a new computer, my Lenovo U350. Looking back, 4 months later, I think I like the U350 better; especially after I gave up on tablets during finals of my freshman year (detailed in Learning to Learn at MIT)

It had a 2.2Ghz Intel Core 2 Duo Processor, 4 GB of RAM, and Windows Vista. I later upgraded it to Windows 7.